While not an official Arduino platform,
WeMos D1 UNO R1 is a supported ESP8266 board,
communicating via CH340 USB-serial chip.

There are at least 4 ways to flash STM32 chips:

Many STM32 Arduino projects use Roger Clark's core and bootloader AKA Maple,
but Arduino now has an ST Microelectronics-supported core and board manager
for which there is an HID bootloader, as described on YouTube.
That video installs the Blue Pill HID bootloader via USB COM dongle,
but we will here use an ST-LINK V2 clone.
My clone ST-Link happens to have the correct pinout printed on its cover;
Verify ST-LINK clone pin artwork by sliding that cover partly open (along the USB plug): 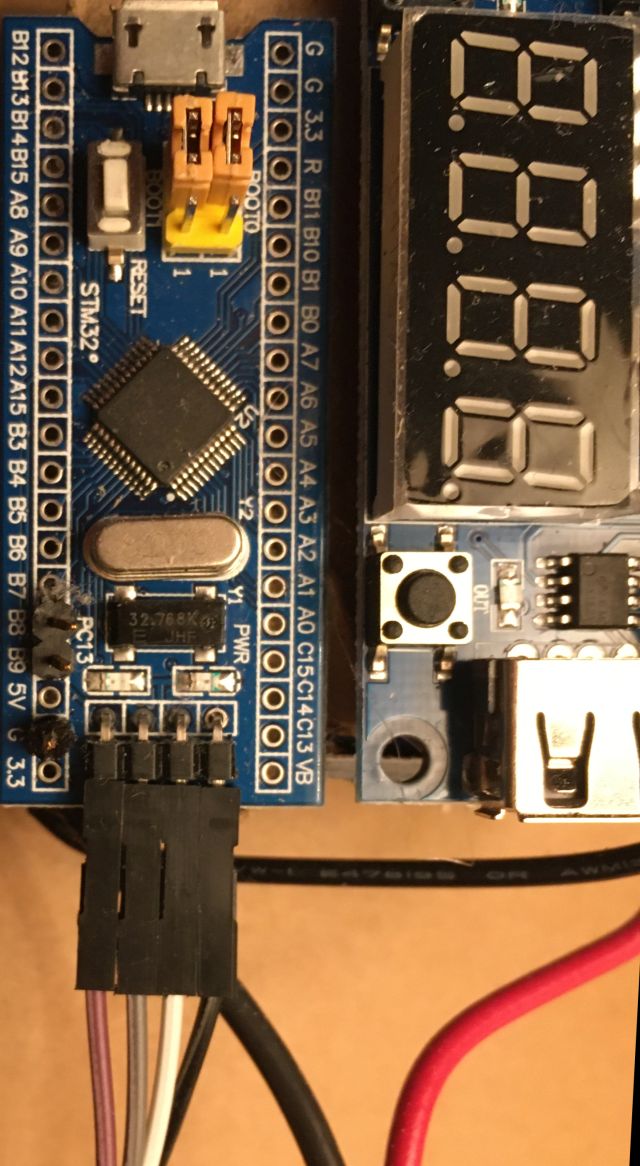 Since SimHub already includes an older version of Arduino,
install the portable (ZIP file) version for STM32;
no need to install Arduino-specific driver[s]...

A simple next step adds servos to the blink loop sketch.
This servo cycling sketch is under GitHub revision control,
with a shortcut to that sketch folder in the Arduino "work" folder.
Both of these ploys work; the sketch runs..
This sketch can be used to verify servo wiring to a Blue Pill without serial control.

Here is the Arduino reference for Serial communication
In STM32duino, Serial device is USB virtual COM port,
using PA11+12, and Serial1 is UART PA9+10,
but Serial may be UART in PlatformIO Arduino framework
unless configured as a USB Virtual COM port in Tools.

Put while (!Serial){;} in setup(){}
Toggling LED off before and on or blinking after provides connection feedback.
The first Arduino sketch I found that combined Serial and <Servo.h> is
Matt Williamson's serial_servo_rx.ino

Single-character control avoids serial string blocking and overflows.
Useful rotation range for my harness' servos is less than 127 degrees;
direct odd rotation values 3-127 to the right harness strap
and even rotation values 2-126 to the left,
reserving values 0-1 to set strap offsets based on immediately next values.

Green LED blink codes feedback when processing servo values,
with 50% duty cycle for idle operation.
Perhaps better to use that LED to signal when servo values are max..?
Blink timing by delay() impacts serial bandwidth, so use millis().

For serial servo control, with or even without SimHub Custom serial device,
this sketch accepts e.g. ASCII characters from Arduino Tools > Serial Monitor.
to move left or right servo based on least-significant bit.
See above for Blue Pill flash programming information.
Characters > 127 do not arrive intact from SimHub JavaScript,
but useful strap servo range is < 127, with offsets applied to received values.
Testing suggests that, running on STM32 Blue Pill,
this sketch handles 60Hz updates of 4 characters,
where 2 should suffice and servos respond less quickly.
By changing from Blue Pill-specific PWM pin and LED assignments,
this sketch should work for other Arduino-supported modules with PWM-capable pins.

As described above, first generation use the least signficant of 7 bits
to select servos for left or right harness tensioning..
A second generation allocates 3 msb for PWM pin selection,
with 0x70 reserved for special commands e.g. 0x7F for servo LUT loading,
leaving 4 lsb to index into a 16-entry LUT of PWM values.
A third generation pairs ASCII characters (14 bits),
of which the most significant bit in each character
identifies it as first (1) or second (0) of a pair.
The next bit in the first character is most significant of 7 data bits,
while the 5 lsb index a channel, which may e.g. be a PWM pin.
The largest channel value is reserved for special commands.
The 6 lsb of second characters is 6 lsb of channel data values.