Photomicrography and macro photography are both popular subjects in the InterWeb,
including among better writers than I.  Consequently, content here will focus (heh) on specific experiences,
rather than more general theory and technique, which for macro photography see e.g. Allan Walls.

Years ago, I saw and admired Micrographia and more recently Ray Parkhurst's work
including contributions to vinylengine.com Stylus images on the not cheap (but not massively expensive).
Capturing images of phonograph needles combines 3 of my long-time interests:
audio, photography, and microscopy, although mostly microscopes with cameras.

Microscopes traditionally shared some mechanical conventions: Consequently, optically-matched objectives and oculars could be swapped among frames.
Practically, after frames evolved from straight tubes to separate heads with prisms,
additional lenses might be introduced, specifically to allow for e.g. vertical illuminators
and/or polarizing filters to be inserted into optical paths.
These optics are typically optimized for some manufacturer's objectives optical formula.
Most modern microscopes use other than RMS threads; here is a list.
Here is a list of threads used in astronomy.

Attaching microscope objectives directly to cameras is considered macro photography,
rather than photomicroscopy, and will mostly be addressed elsewhere.
However, attaching a camera body to a microscope body
with nothing but air between objective and sensor is generally considered photomicroscopy.
This works with so-called finite objectives.

Infinity objectives want a so-called tube lens to make rays finite,
either for oculars or directly focusing on a sensor,
in which case that tube lens may be a telescopic camera lens focused at infinity.
Since some infinity microscopes depend on their tube lens to correct objective aberrations,
direct projection from microsope's tube lens to camera's sensor may yield better images.
AO pioneered infinity microscope production in the U.S.;   read here for more history
Practically, for optical magnifications much more than 1x,
technique and patience exceeding mine are wanted for hand-held macrophotography.
For inanimate as well as opaque subjects, hand-holding has few advantages.

Opaque object microscopy requires reflective, rather than transmissive, illumination.
This is called episcopic (contrasted to diascopic) with illumination accomplished either by
external illumination sources or using so-called vertical illumination built into microscopes,
where light may be directed down thru objectives, e.g. using prisms or other partial mirrors
and called brightfield, or coaxially around objectives, called darkfield illumination.

Most conventional (diascopic biological) microscopes can be used with external illumination
for some opaque microscopy, but their objectives are optimized for viewing thru glass slide covers,
which becomes increasingly important for higher magnification objectives, e.g. more than 10-20x.

Using a digital camera with zoomed Live View eases focusing.
Beyond convenience, best viewfinder focus with DSLR mirror down may differ from best focus on the sensor.
Silent shutter (Canon's mode 2) and remote shutter release minimize vibration during exposures.
Replacing halogen illumination with blue LEDs should improve image resolution,
since the Abbe diffraction limit depends on illumination wavelength and Numerical Aperture (N.A.).
Practically, blue LEDs not only have shorter wavelengths than do red and green
but excluding those longer wavelengths also usefully reduces chromatic artifacts from older and simpler lenses.
Canon DSLRs with Live View and silent shutter (e.g. 50D) can be had used for less than $100.
Even better, free Magic Lantern firmware adds

Traditional eyepiece tubes have about 25mm o.d., for which T-mount adapters were made. Common brands were Kalt, Aetna and Telestar, but many identical or similar clamps were branded for cameras. 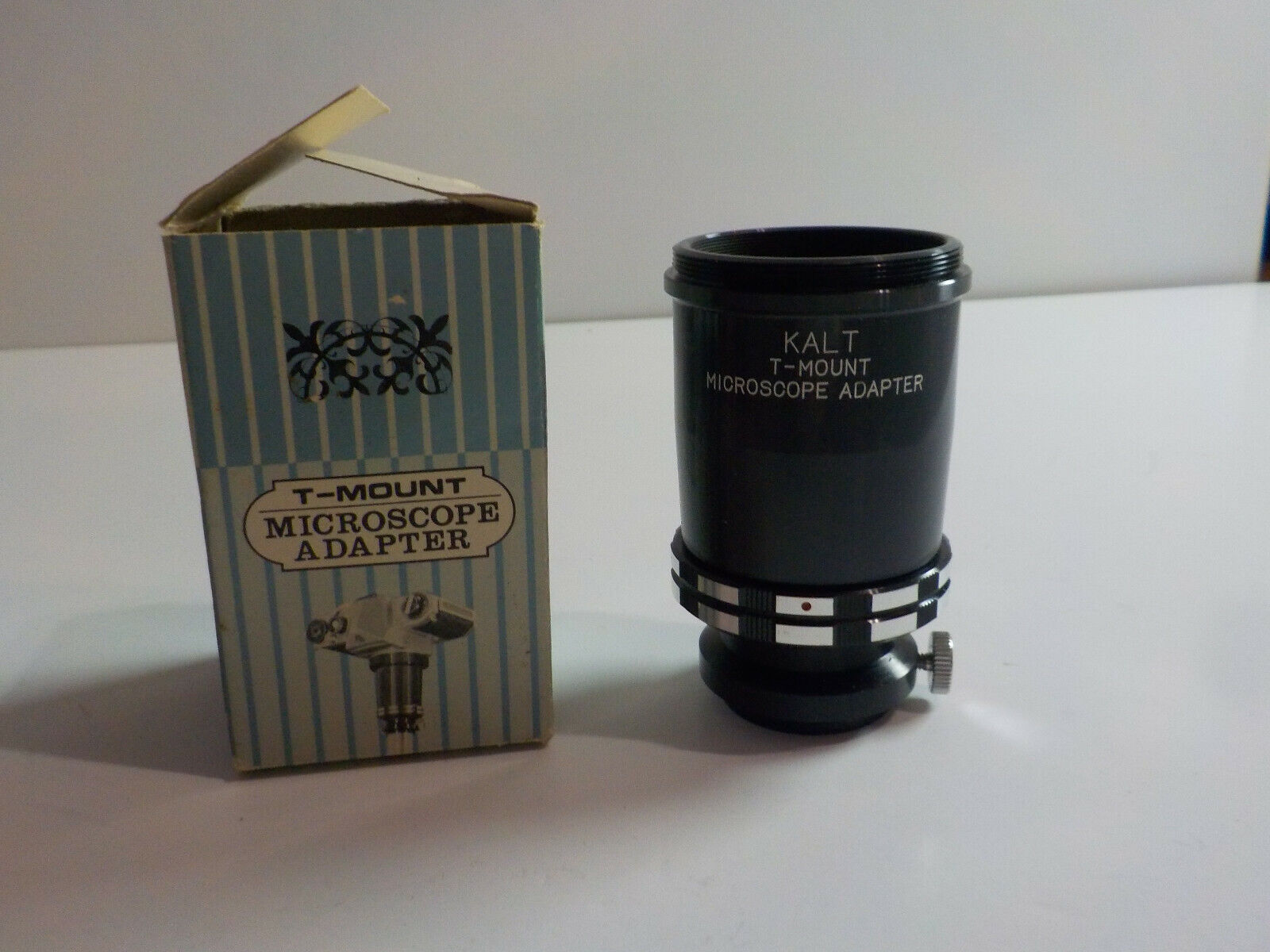 Eyetube adapters typically have T2 or M42 threads, requiring a camera-specific adapter.
A projection ocular and extension tubes should cost less than $100;
monocular microscope heads typically cost much less than trinoculars,
while having less light loss than binocular heads,
and used eye tube camera adapter clamps go for around $15.
obtaining a more or less complete used microscope with epi illumination and bright/darkfield objectives can be tricky.
Starting from scratch, consider Nikon 210mm B/D objectives in an Optiphot...

Initial stylus image capture employs a 10x epi microscope objective with darkfield illumination and Olympus NFK 3.3x projection ocular into a Canon EOS sensor.
To hold the stylus at ~45 degrees, the cartridge was mounted in a headshell with no finger lift and clamped at the bayonet connector using a clothespin:
Although it facilitates sorting spacing between camera sensor and objectives, a bellows is not necessary;
extension tubes suffice, with more length yielding greater magnification.
The resulting image has decent resolution, but poor contrast.

This microscope has short working distance objectives;
the 20x objective would not clear this stylus' plastic grip at this angle.
90 degree shots will clear but require image stacking;
whether objective darkfield illumination will then highlight stylus wear spots remains to be seen.

To investigate low contrast, Ray Parkhurst suggested removing the camera and looking down into the tube.

Internal surfaces were not reflecting appreciable light,
but a small bright spot and dim blob are seen in the optic at the bottom of the eye tube.

Lacking ground glass, wax paper was laid over the camera adapter:
The dim blob is revealed as the projected stylus.
The bright spot appears less focused than when viewed directly and,
depending on viewing angle, more or less distinct from the projected stylus image.

An A.O. #3002 image erector spaces the head further from the epi illuminator
and slightly improved contrast, despite adding magnifying optics in the path:

Infinity objectives can be used with a camera lens focussed @ infinity,
in this case, a Reichert EPIStar 10x with Canon EF-S 55-250mm STM zoomed to 250mm.
To prevent this zoom from collapsing to 55mm, the camera body needs support.
Fortunately, focus is internal. Some observations:

Microscopes better resolve by blue illumination, since shorter wavelength and less opportunity for chromatic aberrations.
A 40mm RGB LED halo ring fits around microscope objectives and can be supported by a 20mm i.d. o-ring. Contrast could be improved by putting something flat black between the cantilever and its light plastic grip.

With an AO head, AO objectives are substantially corrected, better matching a Nikon CF PL relay lens.
Headless, an NFK relay lens approximates AO tube lens corrections.
Finding the stylus with a microscope objective is easier using conventional oculars
than with camera Live View and relay lens.
Since the head has an infinity tube lens, this requires infinity objectives.
Since Series 10 AO Spencers often include a 10X objective, how well does one work on a stylus?
Because they are smaller in diameter than MEIJI and Leitz objectives
for which cardstock half-cylinders were epoxied to LED halos, a shim was cut from clear vinyl tubing.

With NFK 3.3X relay lens and about 200mm projection distance,
full field of view with APS-C sensor is usefully in focus;
both of these images (downsampled, but not cropped) were captured after central focusing (zoomed Live View):

After visually confirming that minimal detail is lost by downsampling original (5472x3648) images by 3x,
then, given optics are NOT matched for color correction,
compared whether blue (left) or green (right) illumination yields more detail:

Increased working distance impacts numerical aperture,
but trials with bellows did not indicate any drastic effects,
with results compromised by difficulty focusing.
Eliminating all optics but objective should increase contrast,
but illumination differences and reduction in magnification confound comparison.

Here is a 1:1 crop of that stylus tip from an APS-C Canon sensor:

50.5mm dovetail to M42 adapter arrived from RAF Camera.
This secures camera body and extender tubes to A.O. arm without head
(and tube lens).
Finite objectives can then be used in A.O. arm
with much better positioning and focus control than by bellows.

These are both 480*320 downsamples of full sensor images in the same microscope arm with similar ring illumination: Zooming the Leitz image
(right-click, "Open image in new tab", then [Ctrl]&[+] keys)
reveals that only about the center third is nearly focussed;
this objective wants to be used with a 3.3X relay lens..
.. or perhaps 2x telextender.

This stack is decidedly less than rigid
and really needs electronic shutter and remote release.

The stylus in the above image was rotated less than 45 degrees from horizontal.
This image has the stylus rotated somewhat more than 45 degrees,
illuminated by white (R+G+B)LED halo, no contrast adjustment:

Much of the camera sensor is wasted on out-of-focus objective.

...because of twisted stylus: